‘We are here to celebrate, not to mourn,’ so declared Obong Bassey Inuaeyen, a suave political leader and business mogul, as he mounted the podium to offer his farewell speech/thanksgiving at the funeral service of his father, late Elder (Chief) Ekpenyong James Inuaeyen on Saturday, August 21, 2021.

The funeral conducted by The Apostolic Church, Mbente community in Nkari clan, Ini Local Government Area of Akwa Ibom State where the departed community leader worshipped till death, had an air of celebration. It had the trappings of a feast, a befitting sendforth for a man who is said to have lived exemplary and left behind positive legacies. 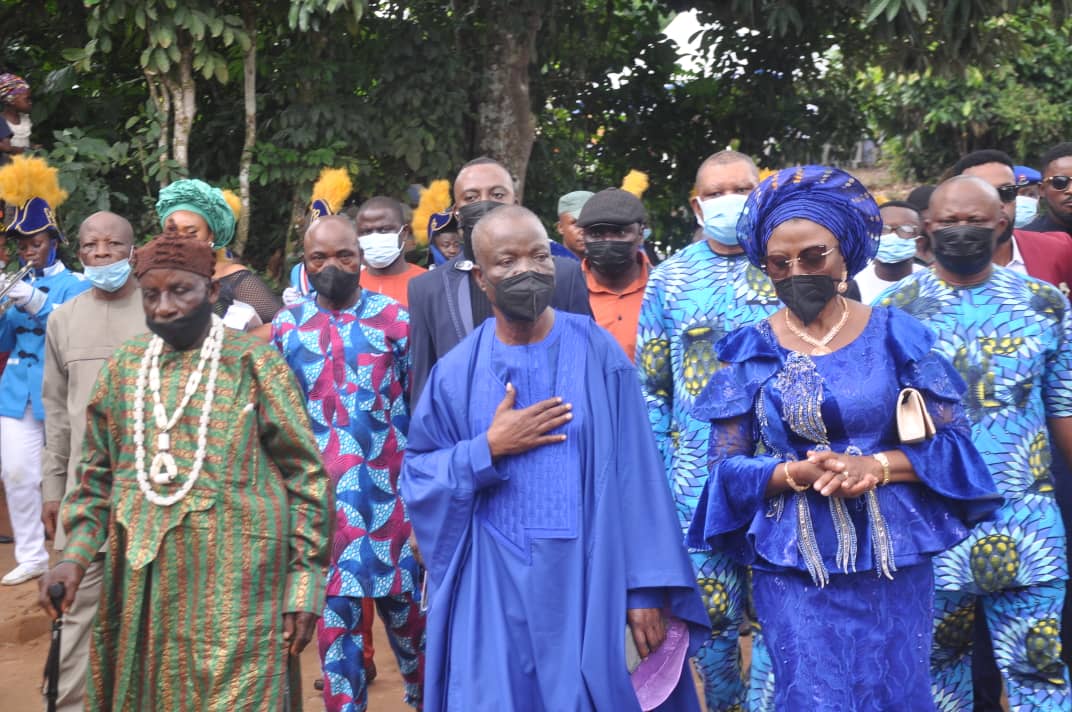 Guests from virtually all parts of the country thronged the serene community. Politicians, business tycoons, academicians, top military brass, clerics, and people from all walks of life were in attendance.

The solidarity of the locals was well felt as they turned up in large numbers. Remarkably, guests defied the poor access road and an unhealthy security situation of Nkari Clan triggered by an interstate land border dispute, to pay their last respect to the departed patriarch. Indeed Nkari was colourful for Chief Inuaeyen, who was the family head of Ikot Edon in Mbente village.

His eldest son, Obong Bassey Inuaeyen, chancellor of Ibom Patriots, a frontline socio-political group in the country, in a farewell speech in honour of his father, adjudged to be the oldest man in the community, having lived from 1923 to 2021 (98 years), extoled him for bequeathing on him and his siblings, virtues of hard work, humility, sincerity, peace-making and love for God, which according to him, have positively defined the Inuaeyen’s lineage.

Saying his departed father’s legacies transcend the various decades of his existence, the junior Inuaeyen said he was a pillar and reference point in the clan and beyond.

Obong Bassey Inuaeyen recalled that in the months leading to his father’s demise, he (son) suffered ill health, revealing that his father kept praying and assuring him of recovery.

“Even in the intensive care unit when doctors told me that I had a 50/50 chance of surviving or dying, I did not lose hope. He was also ill. My father knew about it but never wanted me to leave him on earth…I feel he has gone to take my place in heaven,” he stated.

The Inuaeyens seem to have longevity in their genes. Obong Bassey Inuaeyen revealed that his father died a year older than his grandfather who passed away many decades ago at the age of 97. He prayed to live longer than his forebears. 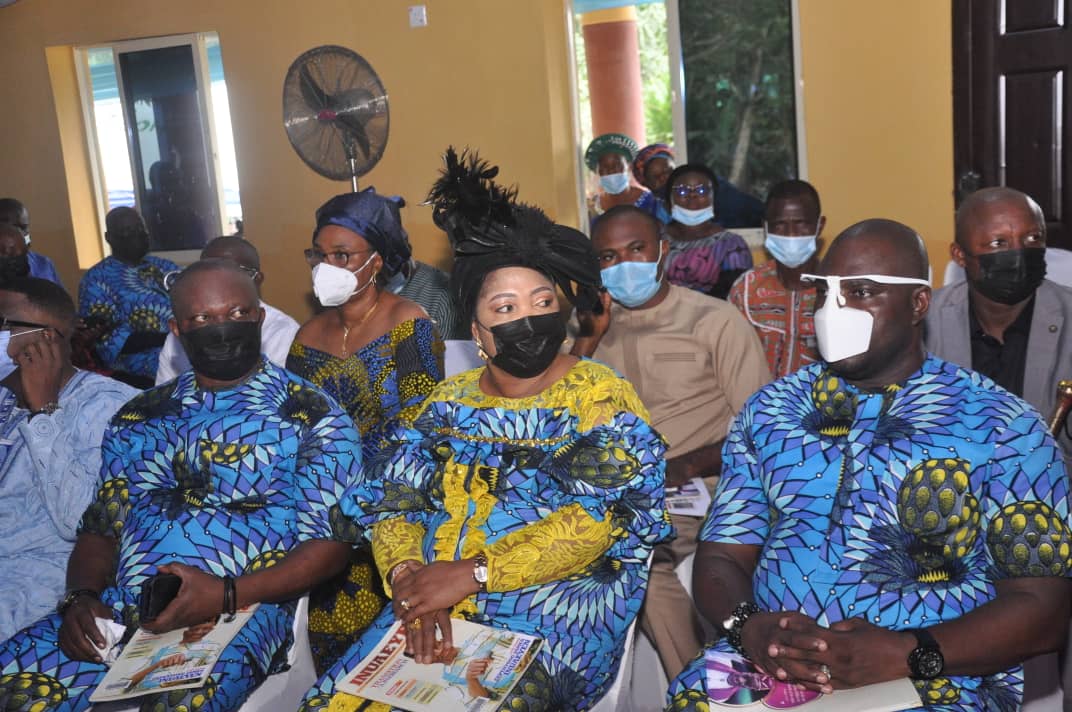 Flanked by his wife, Mrs Ifeoma Inuaeyen and other family members, Obong Bassey Inuaeyen particularly thanked The Apostolic Church for offering spiritual coverage to the family through prayers, and promised that the Inuaeyen’s family will graciously continue supporting the church’s building project.

He went on to commend Governor Udom Emmanuel, members of the Akwa Ibom State Executive Council, legislators, other members of the political class, churches and community for supporting the family.

Governor Udom Emmanuel, in his address, implored the family to mark the loss by appreciating the sacrificial role played by their father in their lives, saying “your father lived long enough to see you rise to important positions of responsibilities, in character, integrity and transparency.

“As he goes home to be with the Lord today, I enjoin you (eldest son) and your siblings to continue to build the spirit of service and altruistic pursuits,” he further advised.

District Pastor of The Apostolic Church, Pastor Okon Effiong in his offertory titled ‘Be Prepared’, drawn from the scriptures in 1st Kings Chapter 2 from verse 1 to 3, urged the congregation to live their lives in preparation of an eventual exit someday.

Pastor Effiong drew excerpts from the bible passage which reads: “Now the days of David drew nigh that he should die; and he charged Solomon his son, saying, I go the way of all the earth: be thou strong therefore, and shew thyself a man; And keep the charge of the Lord thy God, to walk in his ways, to keep his statutes, and his commandments, and his judgments, and his testimonies, as it is written in the law of Moses, that thou mayest prosper in all that thou doesn’t, and whithersoever thou turnest thyself.”

The cleric noted that as a young man, Chief Inuaeyen was “full of activities and aspirations, but when he was on his deathbed, he pondered on his ways and how he lived life,” stressing that like David he left a command for his children to toe the path of the Lord.

Pastor Effiong prayed for a blissful repose for the soul of the departed elder statesman.

Series of condolence messages were presented; rendition by the Mbente District choir of the church and choirs from churches in Akwa Ibom, Lagos and Cross River and other parts of the country ensued too.

A review of the life and times of the departed – as embedded in his funeral programme booklet – indicates that he was born into his paternal family, the Ikot Edon Royal family of Nkari, while his mother, the late Nene Ikwuen, hailed from the royal family of Ekwere Enang in Ikot Offiong family. He was the first son of their parents out of two children.

He obtained formal education at Nkari Central School, Mbente, and read up to Standard 3. Chief Inuaeyen later became a prolific farmer. He married Arit whom she lost to death in 2016, and the marriage was blessed with six children, four males and two females.

“Elder Chief Ekpenyong became a member of Mbente village council in 2001 when he was appointed the Chairman Caretaker Committee of Mbente village council. He held this post till 2011 when a new village head was selected. He was also the family head of Ikot Edon royal family till his death. Chief Ekpenyong Inuaeyen was also the family head of joint family meeting of Ikot Edon in Mbente and Ikot Ebiong in Obbrong villages,” his biography also highlights.

Pa Inuaeyen passed away in hospital on the night of Wednesday, March 3, 2021.

The funeral really reflected the encompassing influence and impact Pa Inuaeyen, his children and family command. The pomp aside, the sermon and hymns were delivered in solemnity in line with funeral tradition. The sermon and hymns reminded the congregation of the temporariness of life on earth.

A conspicuous delegation from the Akwa Ibom State Council of Chiefs also graced the event.

In all, over 89 condolence messages were received by the family as at the time of filing this report.