A health epidemic and possible crisis looms in Usung Atiat community in Oruk Anam Local Government Area of Akwa Ibom State as the village council chairman is said to have masterminded an exhumation and abandonment of a corpse of an indigene of the area. 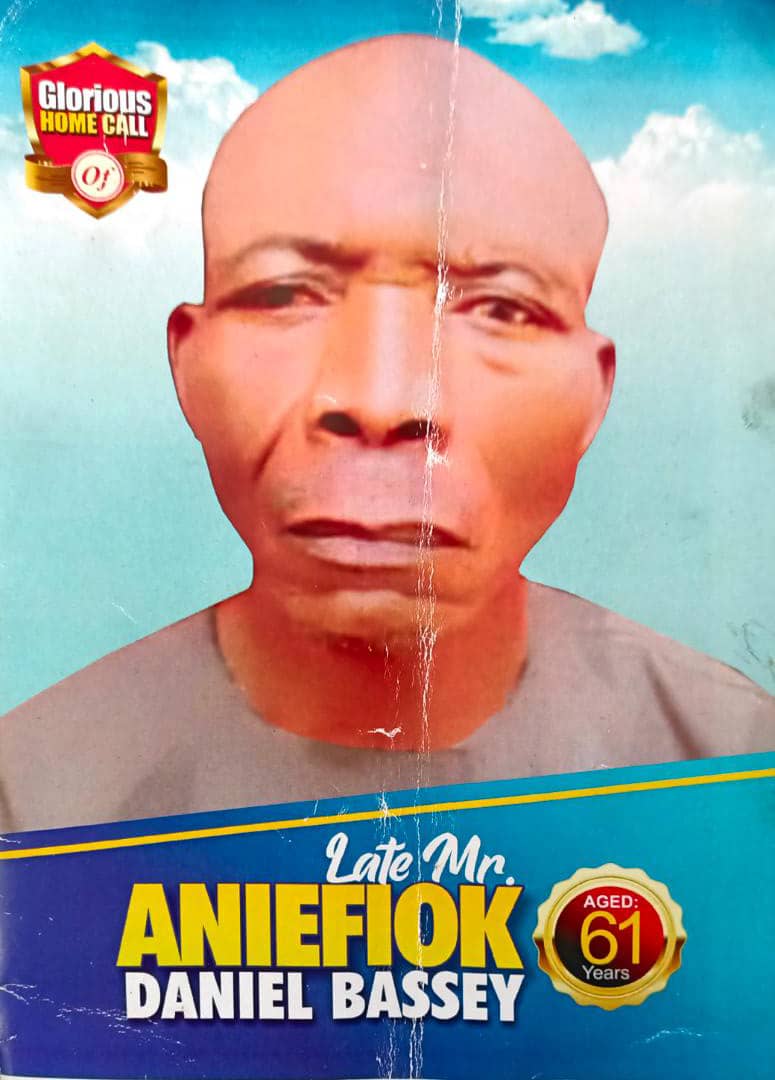 Information reaching our Newsdesk has it that the remains of a 61 year old indigene of the community, Aniefiok Daniel Effiong, were exhumed on the orders of the village council chairman, Chief Aniedu Thompson Okon on grounds that some items were not offered by the deceased family to him.

Prior to the interment of the remains of the deceased, the village council via letter signed by the Chairman-in-Council, Chief Aniedu O. Thompson, and Secretary-in-Council, Ikobong John, on September 20, 2021, sent a letter to the family, demanding for the following items to be given to the council before burial date: 1 she goat, 5 tubers of yam, a jar of palmwine, 1 crate of mineral, 1 carton of beer, 1 bottle of kai-kai (local gin), 1 bottle of Lords Dry Gin, garden egg, tobacco, ntuen ibok (alligator pepper), condiments and firewood. 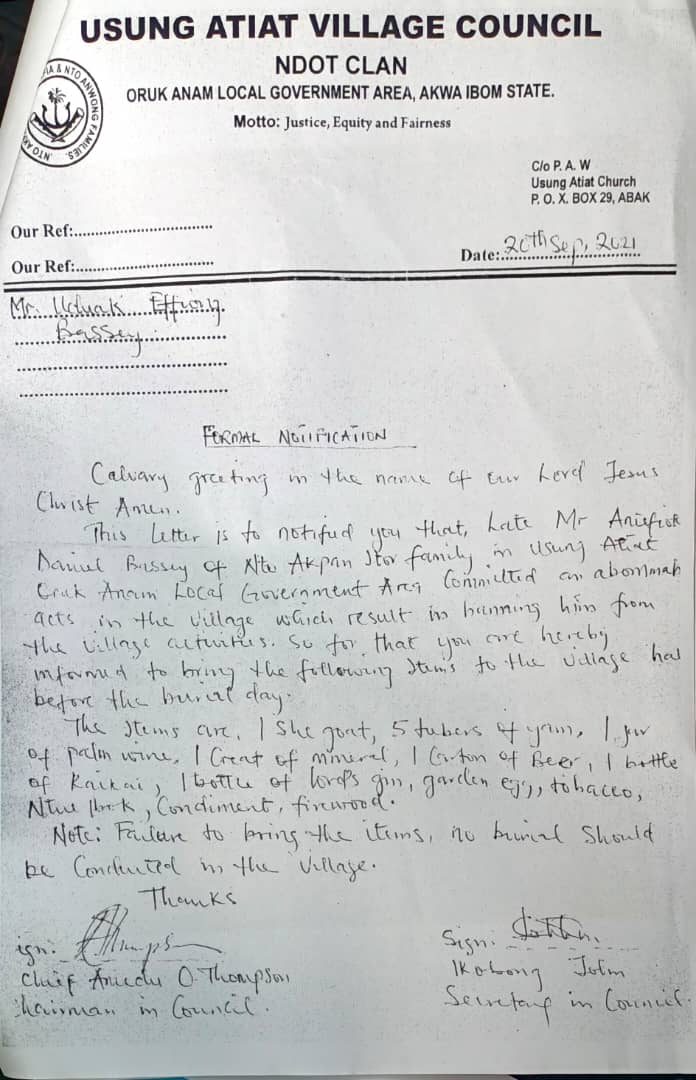 According to the letter sighted by our reporter, the council said the items were to be given as punishment for an “abnormal act” committed by the deceased while alive.

“Failure to bring the items, no burial should be conducted in the village,” the letter warned.

The family were, however, not told the “abnormal act” referenced by the village council. The council equally rebuffed enquires from our reporter on the issue.

The deceased family has demanded for justice on the matter in a petition forwarded to the Akwa Ibom State Police Command. 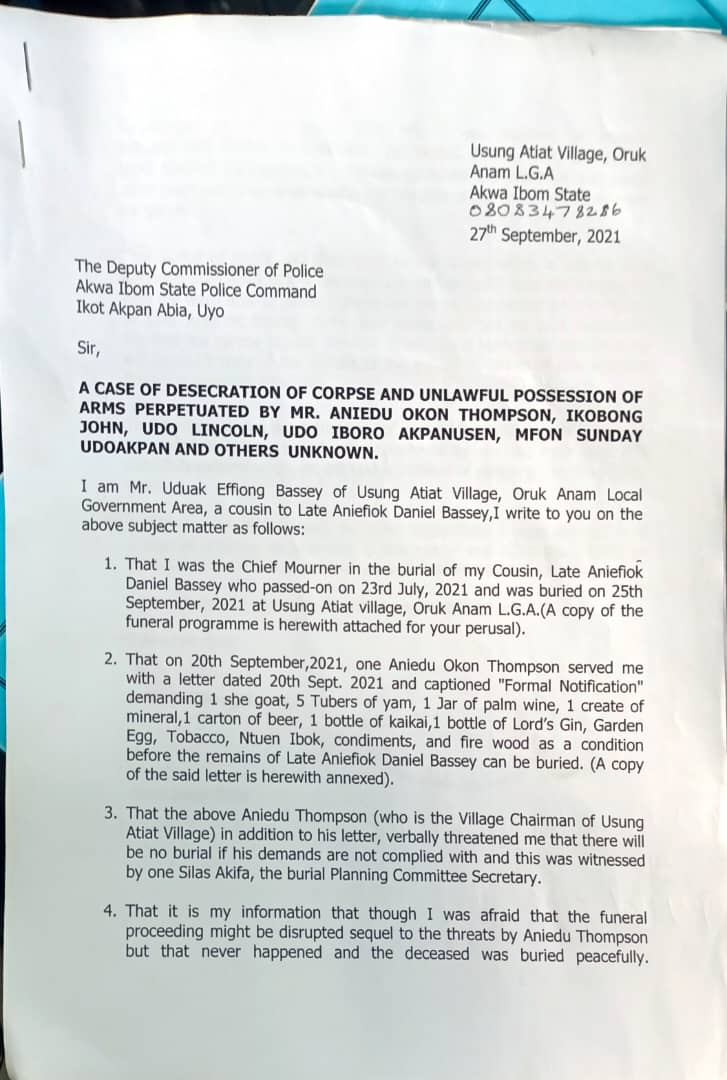 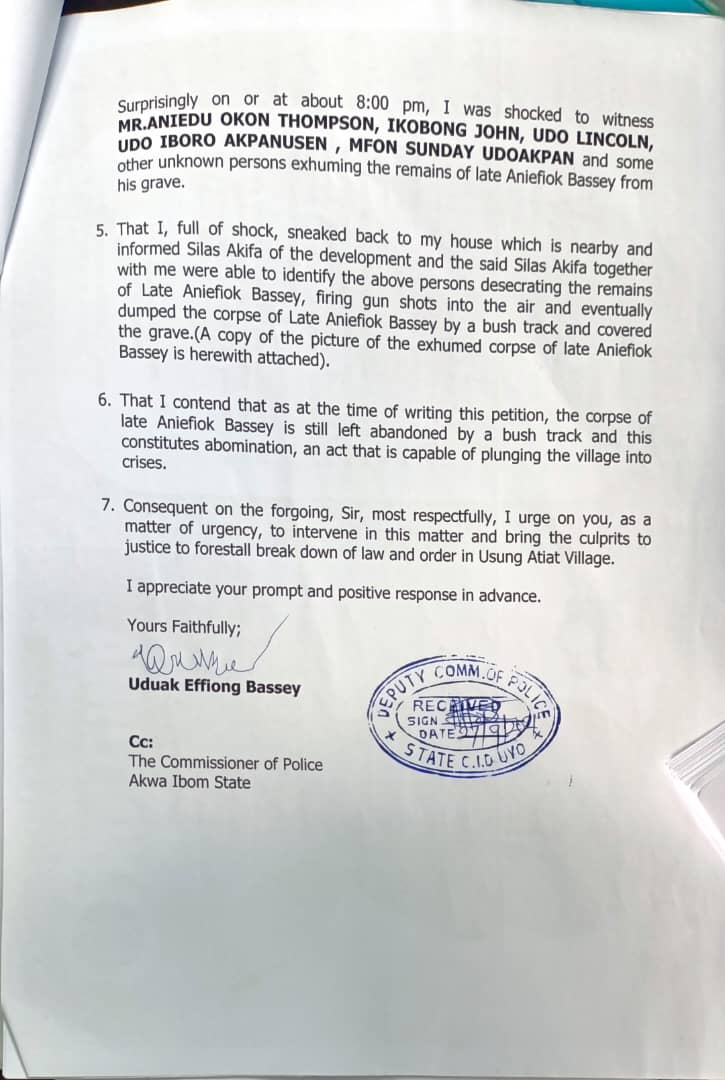 The petitioner alleged that in addition to the letter, the village council chairman verbally threatened him that the burial would not hold, citing one Silas Akifa as witness.

Bassey noted that he drew the attention of Akifa to the exhumation of the corpse.
“Akifa together with me were able to identify the above persons desecrating the remains of late Aniefiok Bassey, firing gunshots into the air and eventually dumped the corpse by a bush track and covered the grave.”

He lamented that “as at the time of writing, the corpse is still left abandoned by a bush track and this constitutes abomination, an act that is capable of plunging the village into crisis.”

The police command was urged to “as a matter of urgency intervene in this matter and bring the culprits to justice to forestall breakdown of law and order in Usung Atiat village.”