The National Association of Akwa Ibom Students (NAAKISS), University of Uyo Chapter has conferred a special award on Senator Bassey Albert Akpan (OBA) for his consistent financing of educational programmes for Akwa Ibom State Students and beyond. 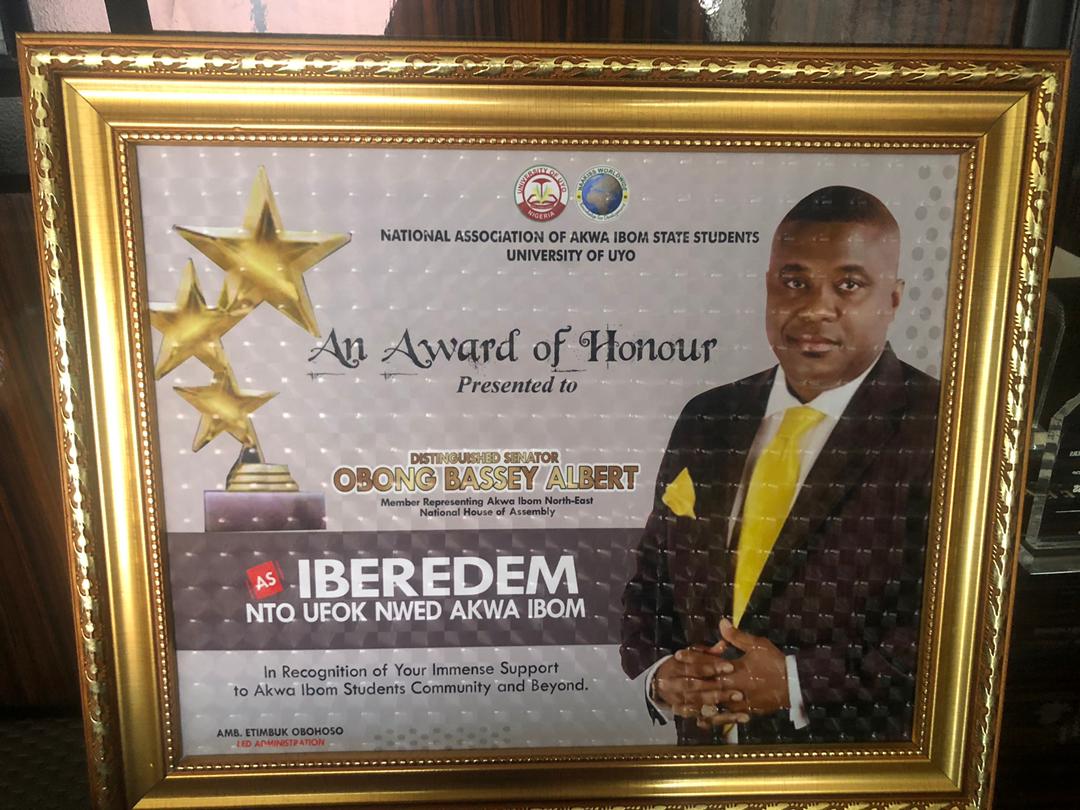 The President of the Group, Comrade Etimbuk Obohoso, who presented the award to Senator Albert, the Leader of Akwa Ibom Caucus in the National Assembly, Abuja, spoke glowingly on the outstanding performances of the Senator in the education sector, amongst others.

Comrade Obohoso noted that Senator Albert, who doubles as the Chairman Senate, Committee on Petroleum Resources (Upstream), has over time committed his energy and resources to funding the education of students of Akwa Ibom State studying in various higher institutions through his sustainable all-school-expense scholarship programme till graduation in which over 400 indigent students have so far benefited from.

He lauded the Senator’s consistency in carrying on with empowerment programmes which cover women, youths and elders in Akwa Ibom North East (Uyo) Senatorial District and beyond.

Obohoso said OBA has been outstanding in the Senate through his people centred bills, motions, petitions as well as for his impressive presentations during the Senate’s plenary on issues that affect not only Akwa Ibom but the country as a whole.

In his remarks, shortly after receiving the award, Senator Bassey Albert (OBA) thanked the Akwa Ibom State students (NAAKISS) for the honour and attributed his successes to the grace of the Almighty God.

Senator Albert restated his resolve to continue aiding indigent students acquire quality education, which according to him, is a veritable tool for self actualization and for the overall development of the society.

He urged the students to remain focused while pursuing their studies and to trust in God at all times to see them through.