The Governorship Candidate of the Young Progressives Party (YPP) in Akwa Ibom State, Senator Bassey Albert Akpan, CON has reiterated that his administration will herald positive developments for oil-bearing communities in the state.

Senator Albert, who stated this when he paid homage to the Paramount Ruler of Ibeno Local Government Area, HRM Owong Bassey Effiong Archianga at his palace, Thursday, November 10, 2022, said having been a key player in the National Assembly on issues of Oil and Gas, particularly in the passage of the Petroleum Industry Act (PIA) and others, he will consolidate the interests of Oil Bearing Communities in the state if elected as governor in 2023.

OBA told the royal father that he was in the palace before proceeding to Ibeno wards 2, 3, 5, 9 and 10, to campaign and seek the partnership of the people as he is coming on board, if elected, to change their lives for the better. 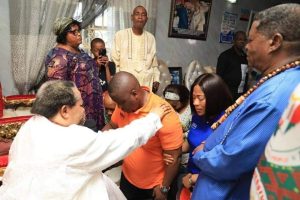 The two-term senator lamented that the Ibeno despite her strategic importance as an oil-bearing community, still lacks basic amenities and promised to ensure that the people have portable drinking water and health facilities.

“We came here to let you understand that we’ll partner with you. We’ll anchor on security, education, roads, health and other social services to improve the masses’ lives. The water project will be one of our fundamental and strategic programmes for the Ibeno people.

“I love Ibeno. I have been working for the good of Ibeno in the Senate and will continue to do so when I assume as Governor,’ Senator Albert said.

The leading Governorship Candidate lamented that funds earned by the state do not reflect so far in the development carried out by the administration of Governor Udom Emmanuel. 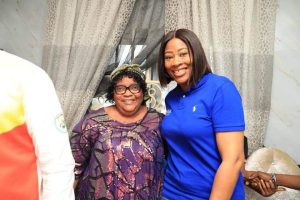 He assured Akwa Ibom people that his administration will ensure transparency in governance, stating that Akwa Ibom money will be used to ensure even development of the entire state.

The Governorship Candidate frowned at the attempt by the state government to gag and politicize the traditional institution. “A Paramount ruler told me that they were ordered to attend the PDP rally some days ago. Some clan heads were even seen hanging on buses just to comply with government orders. That trend will soon be over,” he assured.

The Paramount Ruler of Ibeno LGA, HRM Owong Effiong Bassey Archianga, was full of joy to receive Senator OBA and his entourage and charged him to run an all-inclusive government once he gets into office next year.

“Your Excellency-to-be, you are highly welcomed to my palace. I know you as a son of the palace, who has been stopping over here even before you aspired to be the governor. When you go into the office, run a government for all. Ensure that Ibeno is carried along. Don’t fly away to Abuja or Lagos when you win. We want to participate so that we can have a say in your government.” 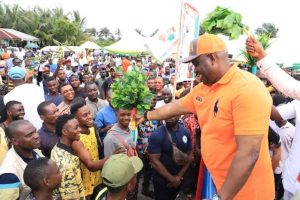 He acknowledged Senator Albert’s contributions towards the eventual actualisation of the Petroleum Industry Act (PIA). He however lamented that communities which are not oil-bearing are claiming so, just to participate in the expected dividends.

The royal father also lamented the devastation of the area by oil pollution and cases of erosion because of the lack of embankment on the beach as well as gas flaring, which has led to a massive reduction in life expectancy.

“When you get into the office, we believe that the anomalies will be addressed”, he added.

Earlier the paramount ruler had called for the rendering of the Ibeno anthem for Senator Albert as a sign of solidarity, capping it up with prayers for his electoral success.