By Ekemini Simon
A Non-Governmental Organisation, Environmental Rights Action/Friends of the Earth Nigeria (Era/FoEN) has called on the Akwa Ibom State Government to adopt zero waste methodology in the management of waste in the State for the health of citizens and protection of environment.
The organization made this known on Friday, during a sensitisation programme for stakeholders towards strengthening local capacity for improved waste management policies in Akwa Ibom State.
In a remark by the Program Manager of the organisation, Ubrei-Joe Mariere, said when government adopts zero waste methodology in her waste management, it will not only solve a lot of problems ranging from a reduction in the complaints of communities who are directly impacted by the hazards of waste, it will also transform dump sites to resource sites.
Mariere explained that instead of having  people on the streets who are without jobs, zero waste model will help to create sustainable jobs for them.
Earlier, the Director of the Organisation,  Chima Williams called on Government to move beyond making waste management polices to enforcing its implementation.
Represented by Head Port Harcourt Office of ERA, Kentebe Ebiaridor, he said that although the Organisation is still in the review process of the Akwa Ibom State waste management policy, at a glance, the policy looks good although they have identified gaps on enforcement mechanism of the policy.
He added “So, government needs to sit up and start enforcing their waste management policies. You do not enact policies and keep it in the shelf of your office. It is for people to learn from that policy. People are not aware what is written down as waste management policy.
“Waste management authority in Akwa Ibom State needs to come out and sensitize the people. Every sector, company and homes need to have that policy so that they can adopt it in their operations. Landlords need to have it so that any time a tenant is going into their compound, they can also make that policy available to their tenants so that people will understand where their role also come in in the waste management sector.”
In their respective speech, residents and members of Akpayak Community in Uyo local government area expressed dismay over hazardous impact the dump site in their community has caused.
Akpayak Community for over 20 years has played host to dump site where all waste from the capital city of Uyo is disposed. The dump site was recently relocated to a nearby dump site even as the State Government is yet to fully decommission the site.
According to the Family Head of Akpayak, Chief Joseph Okpon, residents of the community are still not only impacted by environmental degradation and crisis but are now battling with criminals who find the site a suitable haven for their operations.
He said ” Akwa Ibom State is only the cleanest State on the surface. When government construct gutters, there are no linkages to where it is actually empting. These gutters cause stagnant water which does not only serve as breeding ground for mosquitos but they emit repugnant smell.
” Besides that, in our community, because of the dump site we have here, the kind of criminals we have here are unprecedented. The criminals are licensed because they smoke together with security agents. They harass farmers among other community members.”
The Family Head demanded government to clean up their environment and provide them pipe borne water especially as their streams which were the water source of the community has been contaminated by waste.
Okpon threatened that if they plight is not addressed after long years of suffering and compliant, they may be forced on a showdown against government especially as they stay closer to the Akwa Ibom State government house.
On his part, the representative of Muslim Community, Alhaji Ahmed Isa said it is time the State government gives urgent attention to turning waste to wealth in order to preserve her environment for generations to come.
He noted “it is heartwarming that Akwa Ibom State has one of the highest level of awareness on waste. Why not make the hay while the sun shines? The waste neglect today will definitely affect generations to come.”
Also speaking, a member of the Community, Elder Godwin Okon raised concern over the government seeming non commitment to turning waste to wealth. 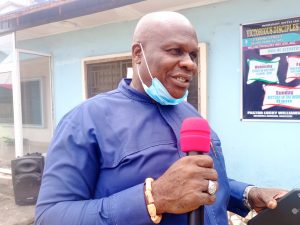 He disclosed how he made steps to attract a $250 million investment on turning waste to energy but was botched by the State government when they  rather prefered to award contract to a Chinese company in 2016 which they are yet to commence the project five years after.
In response, the Chairman of Akwa Ibom State Environmental Protection and Waste Management Agency, (AKSEPWMA), Prince Akpan Ikim said the State government is poised on making Akwa Ibom State free from waste hence its effort on desilting of gutters across the State Capital.
Represented by his Aide, Ime Jacob, the Chairman noted that the concerns of the community has been noted and would be looked into.
The zero waste project has the goal of strengthening local capacities to effectively advance human rights and improve waste management policies in the Niger Delta.
The project is being supported by the Global Alliance for Incinerator Alternatives (GAIA) and it is
being implemented in Benin City and Uyo for a period of twelve (12) months.
Show More
Share
Facebook Twitter Google+ LinkedIn StumbleUpon Tumblr Pinterest Reddit Pocket WhatsApp Telegram Viber Share via Email Print