The Leader of Akwa Ibom State Caucus in the National Assembly, Abuja and Chairman Senate Committee on Petroleum Resources (Upstream), Senator Bassey Albert Akpan (OBA) has felicitated with Arc Obong Victor Attah, a former governor of Akwa Ibom State on the occasion of his 83rd birthday.

Senator Albert, popularly known as OBA, who represents Akwa Ibom North East Senatorial District, in a goodwill message on his 83rd birthday, entitled “Hearty felicitations to a visionary leader and statesman” noted that the life of Obong Victor Attah has been immeasurably impactful. 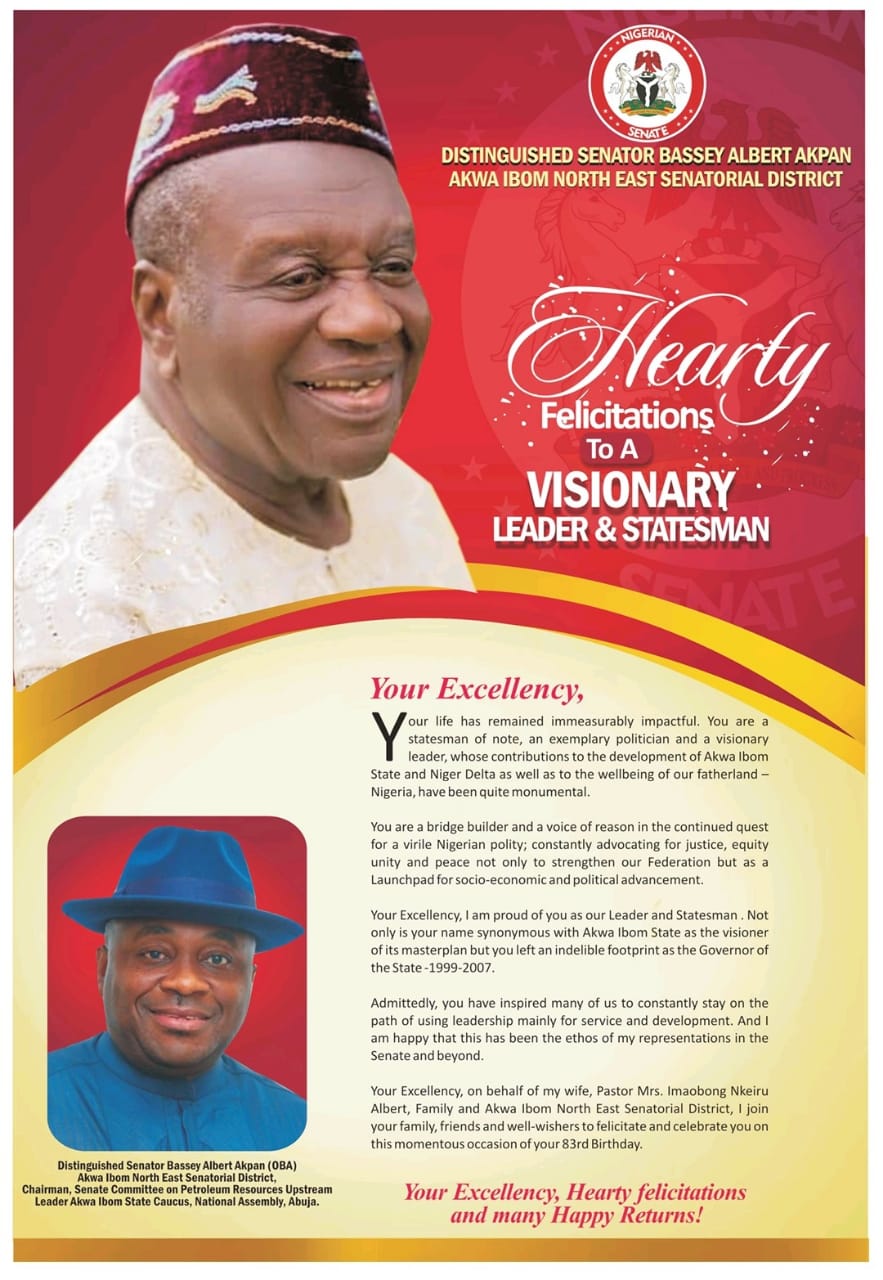 “Your life has remained immeasurably impactful. You are a statesman of note, an exemplary politician and a visionary leader, whose contributions to the development of Akwa Ibom State and Niger Delta as well as to the wellbeing of our fatherland – Nigeria, have been quite monumental,” he said.

According to Senator Albert, Arc Attah has been a bridge builder and one of the conscience of the nation as he constantly canvasses for equity, justice and unity as a basis for development.

“You are a bridge builder and a voice of reason in the continued quest for a virile Nigerian polity; constantly advocating for justice, equity, unity and peace not only to strengthen our Federation but to serve as a launchpad for socio-economic and political advancement.

“Your Excellency, I am proud of you as our Leader and Statesman. Not only is your name synonymous with Akwa Ibom State as the visioner of its masterplan but you have left an indelible footprint as the Governor of the State -1999-2007,” he further added.

OBA said Obong Attah has been an inspiration to many in leadership positions on how to focus on service: “Admittedly, you have inspired many of us to constantly stay on the path of using leadership mainly for service and development. I am happy that this has been the ethos of my representation in the Senate and beyond.”

“Your Excellency, on behalf of my wife, Pastor Mrs. Imaobong Nkeiru Albert, Family and Akwa Ibom North East Senatorial District, I join your family, friends and well-wishers to felicitate and celebrate you on this momentous occasion of your 83rd Birthday.”