The five-day event was an Entrepreneurial Development Training/Strategic Empowerment Programme for 247 women and youths drawn from the nine local government areas of Akwa Ibom North-East (Uyo) Senatorial District. The training package again brought to the fore the worthy leadership and benevolent representation of Senator Albert fondly called OBA. The training came as one in the long list of life-touching and empowerment programmes for constituents of the senatorial district.

The OBA’s training programme was facilitated in conjunction with Small and Medium Enterprises Development Agency of Nigeria (SMEDAN) and executed by Couldron Nigeria Limited/Karama Industrial Ventures Limited. At the commencement of the programme on Saturday, October 17, 2020, participants were paid N20,000 cash.

Apart from the cash, brand new items such as standing hairdryers, electric tongs, electric hand dryers, pedicure bowls, hair clipper, towel warmer, and sterilizers were given at the end of the programme to enhance as starter packs for their skills set. 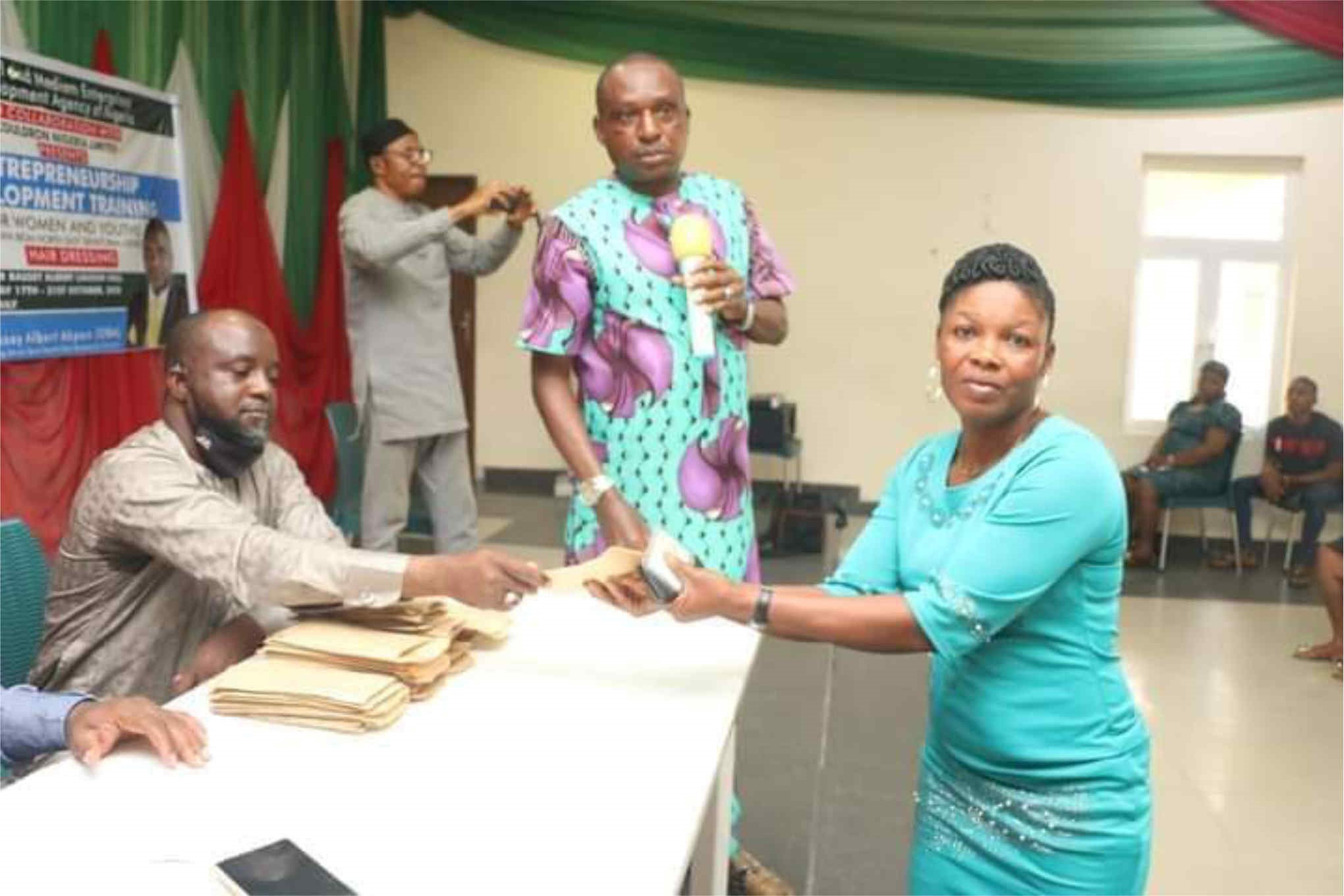 Earlier in his remark at the commencement of the training, Distinguished Senator Bassey Albert, who is the chairman, Senate Committee on Petroleum Resources (Upstream), called on the beneficiaries to put the knowledge acquired into practice in order to grow their businesses.

Senator Albert, who was represented by his aide, Dr Unyime Okon, urged the participants to judiciously use the opportunity to assist themselves in setting up appropriate businesses to help themselves and their dependants, such as barbing and hairdressing shops with the start-up funds as provided. The representative of the senator, Okon, SMEDAN and the consultant, Couldron Nigeria Ltd., presented the starter packs to the trainees.

A beneficiary, Ekong Okon from Ibesikpo Asutan Local Government, lauded Senator Albert on behalf of other beneficiaries for the initiative and assured him of working to achieve optimal results. 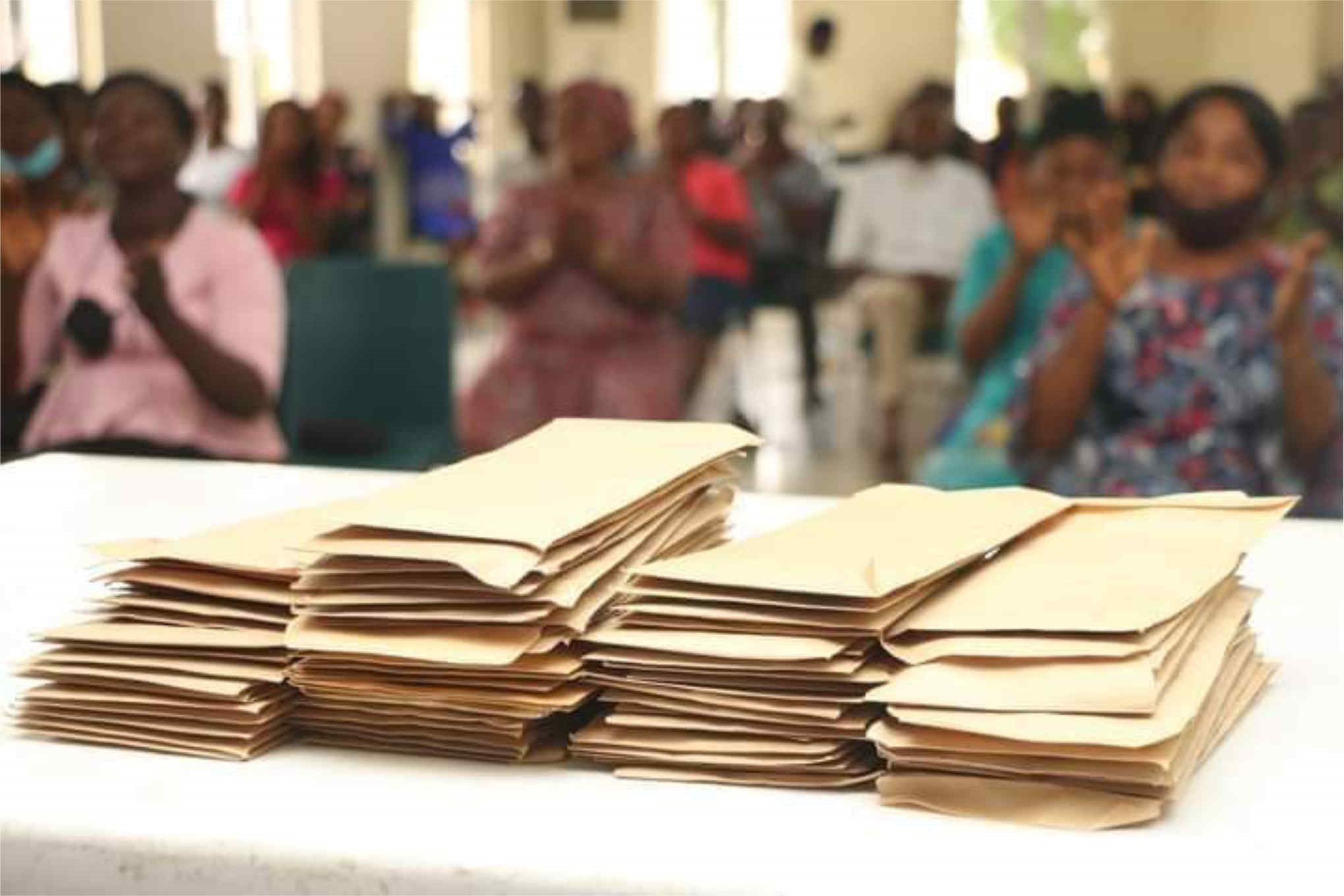 Keen observers are quick to agree that such development programmes as organized for the constituents were “very typical of the people-centric senator as he is always thinking of ways to affect his people.”

Demonstratively, he has put in place an effective constituency office to serve as a rallying point for Akwa Ibom North East (Uyo) Senatorial District. Many of his constituents see this as a big feat by Senator Albert, who has equally shown tremendous capacity in legislative engagements at the Senate. It is on record that he chaired the Senate Committee on Gas Resources in the 8th Senate and is currently in this 9th Senate, the chairman, Senate Committee on Petroleum Resources (Upstream).

The senator has become a role model in our political space and a timely inspiration for many including upcoming politicians. That’s why recently a frontline politician, Otuekong Ekpe Atakpo, leader of Uyo Senatorial District Leaders’ Forum, described Senator OBA as a kind-hearted politician that genuinely has the people at heart. It is also on record that within the first six months in the Red Chambers, the distinguished senator nominated two major roads that were neglected for many years in the senatorial district for construction by the Niger Delta Development Commission (NDDC). However, those roads have been taken up now by Governor Udom Emmanuel courtesy of Senator Albert, as the interventionist agency failed to execute. The roads are Obong Itam-Idu Uruan phase 1, located in Itu and Uruan local government areas and Ikpe Ikot Nkon-Ikpe Okon – Ikpanya Road located in Ini and Ibiono Ibom LGAs.

The constituency programme such as the training scheme is a fulfilment of his political vision to continue to contribute to the manpower and infrastructure development of the senatorial district in particular and the state in general. For his strong belief in people’s involvement in governance, the senator on assumption of office did set up a management committee for his constituency office in Uyo chaired by a seasoned politician and entrepreneur, Mr Daniel Udoh aka North South, with members drawn from all the nine local government areas that make up Uyo Senatorial District. This is perhaps an innovation that is rare and applaudable.

In 2015, he had floated his maiden football tourney that engaged over 200 young constituents including other stakeholders positively. The football fiesta helped to discover new talents in football and at the same time enriched them with fabulous cash prizes typical of the people’s senator. Senator OBA is also a good party man and one who has shown tremendous respect for his party, the Peoples Democratic Party (PDP), even in a decision he had to take in the past to show the supremacy of the party in the course of his political journey.

His performance whenever opportunity presents itself to serve is simply excellent. Right from his days in the banking industry where he made great impacts and held several offices including vice president at First City Monument Bank (FCMB) in charge of South South before becoming commissioner for finance in Akwa Ibom State; to the present position as a distinguished senator of the Federal Republic of Nigeria.

It was therefore not very surprising to hear that he had been awarded ‘Most Outstanding Senator in Nigeria for 2020 by Face of Democracy Nigeria (FDN) Project, organisers of Democracy Heroes Awards on Wednesday, October 14, 2020. What is more, the training scheme for the 247 constituents came just few days away from clinching that coveted award. A Scottish novelist and poet, Mr Roberts Louis Stevenson, wrote: “Keep your fears to yourself but share your courage with others.” As Stevenson said, the people’s senator has shown courage in his political odyssey and frankly, his love for his people knows no bounds.

Senator OBA has affected lives across Akwa Ibom without asking questions of where they come from. He has impacted many hearts, therefore confirming his large heartedness as well as giving his people a sense of value. In Abraham Lincoln’s classical definition of democracy, ”the people” is mentioned three times which goes to affirm the rightness of Napoleon’s assertion that the people or masses are the ace where leadership in public sphere is concerned.

Senator Albert is a political rare breed on our shores; a grassroots politician of reckon, consummate administrator and cerebral legislator.

He is currently bankrolling an all-school expense scholarship for nearly 400 constituents and beyond studying in various tertiary institutions across Nigeria.

There are certainly more opportunities in the offing for Senator Albert to do more for his people.

Senator Bassey Albert: Beaming Hope When All Else Failed