“You cannot swim for new horizons until you have courage to lose sight of the shore.” – William Faulkner

“Cast thy bread upon the waters: for thou shalt find it after many days. Give a portion to seven, and also to eight; for thou knowest not what evil shall be upon the earth. If the clouds be full of rain, they empty themselves upon the earth: and if the tree fall toward the south, or toward the north, in the place where the tree falleth, there it shall be.” Ecclesiastes 11:1-3.

Life is a free race and everyone can run. The pace at which each person moves depends on their proclivities to certain determinants. While some may argue against ‘fortune’, some would admit that it helps their ascension. Achebe would often remind that each person is either guarded or hunted by their ‘Chi’. Their Chi could expedite their progression to their destinies. Their Chi may also encumber their fortune, dragging them down the curve of retrogression and persistent failures.

There are some who run the race in speed. Others exist who simply jog. There are those who merely choose to stroll. All these are trajectories which take men to their utmost heights in life. This piece is intended to expose two ideal compartments of Senator Bassey Albert. The two are woven in the ‘strange’ lexical items that form the title of this article: “profundity” and “dragnet”.

Distinguished Senator Obong Bassey Albert Akpan (OBA) is not different. He is just like any other human on earth. Conceived in his mother’s womb and delivered of, like the rest, the Senator seems to have been on the speed lane of life. He is exactly like Barack Obama and other renowned world leaders. They were dreamers who gained their fame through hardwork and conscious effort towards dreams fulfilment. OBA’s dream appears like a ‘wireless device’ in God’s hand. It is a tool freely tuned for his transfiguration. For those who knew him from a humble background, they would admire the frame he’s built for himself.

OBA is a figure in the mould of the symbolic elephant, whose mythology embraces sensational logic. The popular story is told of that myth, where six blind men paid a visit to an elephant. They had previously discussed their diverse viewpoints of the animal. So the time came and they were assisted to touch the elephant. The first man touched the side of the huge animal. He said the elephant was “smooth and solid like a wall!” The second touched the elephant’s limber trunk; he said the animal looks like “a giant snake.” The third touched the pointed tusk and said the creature is as “sharp and deadly as a spear.” The fourth man stretched forth his hands, touching one of its legs. He described an elephant as an “extremely large cow.” The fifth touched it’s giant ear, calling the elephant a “huge fan or perhaps a magic carpet that can fly over mountains and treetops.” And then came the sixth blind man who gave a tug on the elephant’s coarse tail. He too submitted that it was “nothing more than a piece of old rope which was dangerous”.

As universally applicable to the Indian story, these perceptions represent the cultural relativity of various social backgrounds. Globally, people always form opinions based on knowledge and exposure. But what the story teaches is that there are different sides to every situation. The snag is that only critical analysis of the various components of a subject should best give the acceptable summation. Question is, what if the blind men touched up to 10 parts of the elephant’s body? Truth is, they would certainly have 10 viewpoints of the animal.

Consequently, all parts of the elephant are useful to the animal. Just like the creator made body parts for humans, that of an elephant are also. Senator Bassey Albert is a man of many parts. Born into a humble family of Chief Albert Robert Akpan in Ididep Usuk village, Ibiono Ibom Local Government Area, he rises to stardom. Sophisticated and levelheaded, the Senator has built for himself an esteemed public trust. An Economist by learning with Masters Degree from the University of Nigeria, Nsukka, his training and public service has given him an edge. He is well exposed to various levels of human life. A deep thinker and wild dreamer, he’s not only being likened to that elephant. He’s symbolic of the image of an elephant. Perhaps it should be added that the Senator is not only so described for being physically tall and huge. Neither is he so portaryed for holding the Traditional Title of ENIN IBIONO IBOM (Elephant of Ibiono Ibom) as was conferred on him by Ibiono Ibom Traditional Rulers Council since 2009. He is well read, widely traveled, highly connected and absolutely on ground.

Representing Akwa Ibom North East Senatorial District, Senator Bassey Albert Akpan, is the Chairman, Senate Committee on Petroleum Resources (Upstream) and Leader, Akwa Ibom Caucus of the National Assembly. Senator Albert has made an indelible mark on his legislative engagements. But just before that is considered, his enticing career and political debut pop for remembrance. He is a banker whose career began in 1997 at the International Operations and Consumer Banking/Retail Banking Unit of the United Bank for Africa (UBA). Two years after in 1999, the Continental Trust Bank secured his services, deploying him as Manager, Corporate Banking group at the banks Head Office in Victoria Island, Lagos. After four years in 2003, he was the Uyo Branch Manager of the First Inland Bank Plc.

Albert’s professional banking skills flourished as he worked hard to win the ‘Best Performing Branch Manager Award’ in the South-South region and Nationwide in the bank’s 2004 midyear review. Between 2005 and 2007, OBA was absorbed at First City Monument Bank (FCMB) as Assistant Vice President, where he served Akwa Ibom and Cross River States as General Manager. A man of goodwill and industry, he was also the Zonal Head in charge of over 15 branches of the zone.

A Commissioner of Finance since 2007, Obong Bassey Albert who chaired the state’s first revenue summit in April 2009, worked even harder, raising the yearly Internally Generated Revenue (IGR) to N15.6 billion as at the last quarter of 2013. As Chairman of the Inter-ministerial Direct Labour Coordinating Committee, Albert supervised the delivery of over 6,000 life-touching projects in health, education sectors, rural and human capital developments. His stewardship as commissioner for financed lasted till 2014 when he began full involvement as governorship aspirant to succeed his boss in 2015. 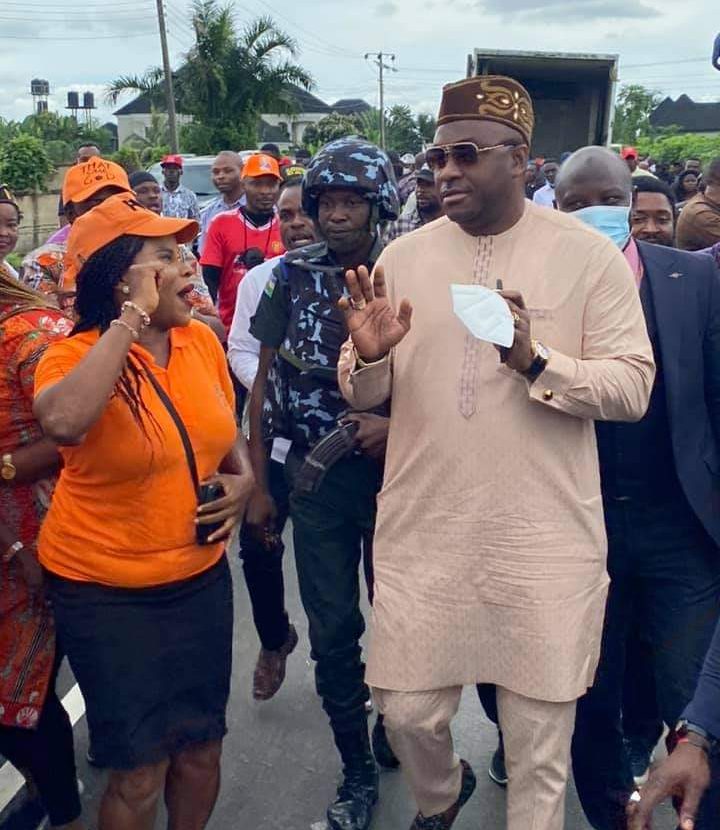 Of course, the Senatorial zoning principal was brought to the fore, a reason he stood down his aspiration, going to the Senate for the mean time. Obviously, Senator Albert’s representation is a huge benefit to Akwa Ibom people. How is this so? The remaining segment of this piece tells a better story.

Bassey Albert’s journey to the Senate was not accidental. Having first won election as Senator in 2015 and then in 2019, OBA’s expertise in banking and economy stood him out when his motion on the state of the nation in 2016 led to the realization that Nigeria was sinking deep into recession. Through this motion, the Senate summoned the then Minister of Finance, Mrs Kemi Adeosun and the Central Bank Governor, Mr Goodwin Emefiele who both admitted that the country was truly in recession. It is on record that Senator Albert has shown convincing commitment to his legislative mission, especially in sponsoring bills on youth empowerment, industrial revolution, among others. While his Petroleum Industry Bill was recently passed and assented to by the president, his petition at the red chambers led to the reinstatement of two federal public servants from Akwa Ibom State whose appointments were wrongfully terminated. The reinstatement of a police officer, Celestine Obot Williams from Ini Local Government Area of Akwa Ibom State after 21 years of wrongful dismissal and promoted to the rank of Assistant Superintendent of Police (ASP), also revealed his zeal for service.

As Chairman, Senate Committee on Petroleum Resources Upstream, Senator Albert is working wonders to the delight of all stakeholders in the sector. A smart gentleman at the red chambers, OBA’s interest in the Nigerian project reflects in his goodwill even as a ranking Senator. An opposition member, his blended priorities give him a swollen record of achievements, standing him out above his contemporaries.

For instance, Bill to Amend the Deep Offshore and Inland Basin Production Sharing Contracts Act (DOIBPSCA) D3 LFN 2004 is one of the fastest bills to be passed by the Senate in recent times. The amendment of the Act was to maintain a competitive environment for the oil and gas sector to thrive and to serve as a precursor to passing the Petroleum Industry Bill (which through his effort is now an Act in operation). Upon passage of DOIBPSCA, it was eventually signed into law by President Muhammadu Buhari, GCFR, bringing about $1.5billion into the covers of the Federal Government.

Most Outstanding Senator in Nigeria in the 2020 Democracy Heroes Award organized by Face of Democracy Project and held at Transcorp Hilton hotel, Abuja on October 14, 2020, Senator Albert is reputed for using his privileged position as chairman of the Senate Committee on Gas in the 8th Senate, and later as Chairman of the Committee on Petroleum Resources (Upstream) in the 9th Senate to resolve lingering NNPC/Chevron Escravos Gas to Liquid Deal. The deal had long favoured Nigeria by raking in several billions of dollars into the country’s economy.

Senator Albert’s arm is wide enough to cover all manner of persons within and outside the state. From a scholarship of over 180 students mostly from the nine LGAs of Akwa Ibom North East (Uyo) Senatorial District in 2015, OBA is currently funding the tertiary education of 381 students across the 31 LGAs of the state. His empowerment programme in 2018 affected 2,200 of his constituents with many going home with cars, tricycles, motorcycles, generators, hair dressing equipment, sewing machines, cash empowerment for traders, among others. This was in addition to projects like construction of roads, schools blocks, markets stalls; provision of boreholes, electricity, recreational parks, community development centers, and so on. This feat was complemented by the 2020 yuletide/Festive Season empowerment of 520 physically challenged persons with wheel chairs, white canes, cash and bags of rice. From verifiable records, over 5,000 women and youths in the 9 LGAs are beneficiaries of OBA’s training programme in entrepreneurial skills with the relevant cash benefits. Also, not below 350 constituency projects are spread across Akwa Ibom North East Senatorial District, courtesy of the meticulous services of Senator Bassey Albert.

A holder of Excellence Award by the Federal Government through the Nigerian National Petroleum Corporation (NNPC) presented in January 2020, the South South Senator of the Year 2017 by Senate Press, is ‘voluminous’ not only in his unbroken record as a Senator. His tact, gripping power of association, career pedigree and public service have become his cumulative selling point for the journey ahead. The feat so far recollected shows that Senator Bassey Albert Akpan is not unmindful of the shore. Indeed, he has intercepted and overlapped turbulent waves, hence touching the new horizon. His bread is scattered on the waters and recovery is inescapable.

In other words, OBA has cast his net in the ocean and catching fishes can’t be contested. His intellectual depth have made things easy for him, piling up his breakthroughs in constant succession. From his days in the banking hall to the place of a Bank Manager, Vice President, General Manager, Zonal Head, Finance Commissioner and now Senator, the oil of grace keeps flowing on his head. This divine approval blends with his ‘social intelligence’. As hinted in this piece, Senator Bassey Albert, husband of one wife and father of children, has proven himself a leader whose heart is large enough to accept all. Therefore, as discussions for who becomes what in 2023 assume prominence, OBA’s green card is his profundity and political dragnet.

Joseph Atainyang is a journalist and public affairs commentator.